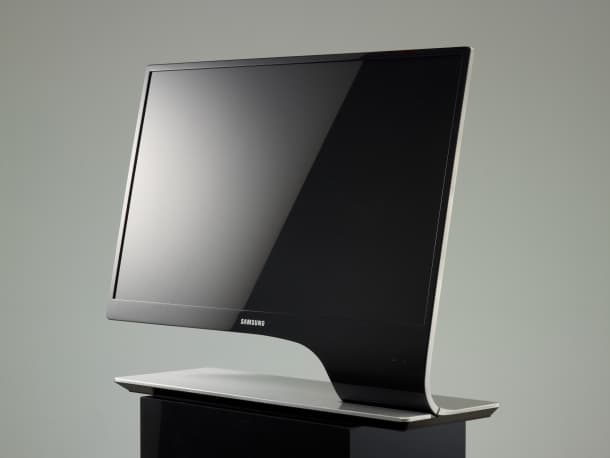 Samsung have unveiled some enigmatic and rather unusual looking 3D computer monitors at CES 2011. There are two main new series launched, the SA950 or ’9 series’ and SA750 or ’7 series’. Both series come with ‘S23′ and ‘S27′ prefixes to denote 23 inch (S23A750D, S23A950D) and 27 inch (S27A750D, S27A950D) screen sizes. We agree that the model names are a little long and convoluted as far as Samsung monitors go, but who cares – the big news here is a 27 inch 3D monitor! The other big news is that the new displays make use of a proprietary 3D technology that is an entirely seperate entity from Nvidia 3D Vision but is specifically designed for PC users. They will include a pair of Samsung ’3D’ glasses which are assumed to use some form of active shutter technology.

Some key highlights include; 2ms response time, 1920 x 1080 resolution, HDMI 1.4/DisplayPort and DVI-Dual link (SA950 only) as well as WLED backlighting. Presumably the panel type is the usual TN (Twisted Nematic) with 120Hz refresh rate. This refresh rate can be outputted via DisplayPort on both models and also via DVI Dual-Link for the SA950. The new monitors also make use of Samsung’s ‘Ultra Clear Panel’ technology used on some of their TVs that is supposed to bring the contrast advantages of a glossy display whilst retaining a retaining some degree of anti-glare capability. The 27-inch HDTV (with TA rather than SA prefix) versions of the ‘SA750′ and ‘SA950′ were first officially launched in South Korea at a price that translates to around $800 USD for the ‘TA950′ and $750 for the ‘TA750′. The TA750 and TA950 series are also currently available in the United States and United Kindom wuith the T27A950 currently featured in our 3D monitor shop.

If you would like a little taste of what to expect from the upcoming SA950 and SA750 some videos have been posted by Samsung Ukraine which show off some highlights of the new computer monitors. Both the SA750 and SA950 are confirmed to be 120Hz models with a number of interesting features – including on-the-fly 2D to 3D conversion for conventional 2D material. Aside from aesthetics and ports, another interesting distinction made on the videos is that the central stand of the SA750 features touch-sensitive navigation buttons which seem intuitively organised to allow easy navigation; provided they actually respond properly when touched. The SA950 series will feature a similar navigation system on the neck of the stand. Also be sure to check out our full review of the T27A950D.