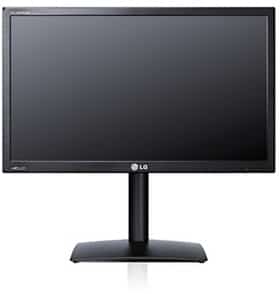 As the largest global supplier of IPS panels to the likes of Dell, HP and Apple it is only surprisingly recently that their ‘own brand’ IPS models really took off. Although the release was quite staggered and availability is a little iffy compared to Dell’s equivilent products their previous IPS1 and IPS6 series monitors have been a great success. LG have announced a new ‘IPS5 series’ of monitors which shares the same basic specifications as their predecessors; 1920 x 1080 resolution, 250 cd/m2 rated luminance, 5ms grey to grey response time (14ms typical) and WLED backlighting. All going well four variants will be launched in Europe during October; the 21.5″ IPS225V and IPS225T as well as the 23″ IPS235V and IPS235T. The ‘V’ models will include VGA, DVI-D and HDMI outputs as well as a headphone output. The ‘T’ models will feature only VGA and DVI-D ports. ‘P’ varients (IPS225P and IPS235P) with height-adjustable stands are due for release in Europe in November. Prices availablility in the United States is still to be confirmed but such models often make their way there a few months after release in Europe.

Despite the basic specification remaining largely the same as before LG has promised some ‘tweaked’ performance and a bit of an aesthetic makeover. The ‘new look’ is the same for all models with the height adjustable stand and more robust cylindrical neck of the ‘P’ models being the only real differences in this department. The styling this time around looks less like an old glass coffee cup (or plain plastic business monitor in the case of the IPS1 series) and a little more elegant with a relatively thin bezel with brushed metal effect. The buttons are also tactile-touch which should prove less frustrating to use. Although the exact nature of the performance ‘tweaks’ are unknown we are hoping one of the things LG have been able to improve upon is the fairly lacklustre motion performance of their previous offerings. LG also make explicit note of their certified factory calibration and whitepoint of around 6500K for (hopefully) good out-of-the-box colour representation. We hope to review these members as soon as possible and hope the UK launch goes more smoothly than last time!